How & Why to use PLC | Ladder Logic Programming Examples

by Kane Dan
in Industrial Automation
306 3
0 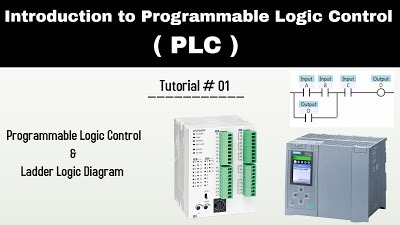 In this tutorial you will learn all the concepts of PLC, Ladder logic programs, How it works, why we need PLC, Why we use them and History of PLC in the field of Automation. So let’s talk about the Programmable Logic Controllers (PLC’s). The first question is what is a PLC?

Programmable Logic Controllers are probably sounded an awful lot like a computer yes it is. It basically specializes computer that made for industrial and other commercial applications. The basic difference between a normal computer or Microcontroller and PLC is that the PLC has more INPUT and OUTPUT capability. It can directly read voltages, switch inputs, digital inputs and also directly controls the output.

So, first of all, we learn what exactly mean of the Programmable Logic Controller.

What is the meaning of controller..? What is the importance of controller? When we say that the system is controlled the exact meaning of this is that we controlled the different parameters of a system. For example, if we
are controlling the vehicle either we control it by steering or by breaks or something else. If the speed is increased and we want to stop the vehicle what will we do, we remove the feet from the accelerator or press the breaks ultimately we add or remove something in the system. So controller controls different parameters which are ultimately affecting the system performance.

Now why it is called as a logical controller. In previous we see controller controls different parameters but the parameters with a certain logic. For example we have a controller for elevator If you are on the 3rd floor and calls a lift after getting in and pressing the button of ground floor and at the same time in 4th floor someone press the call button what exactly elevator perform first on that time..? does it go up and pick them first or does it come down to the ground floor first. To manage all that the logics will be used so called a Programmable logic controller.

PLC is basically a controller that you can program. So it’s the controller that works under the certain logic and that logic can be changed or can be altered by using a programming.

Why Use PLC in Automation

Where is the need of Automation? If you have 2 cars and have a chance to automate 1 car. Among of both cars, 1 is used only one time to travel between “A” to “B” area and second car travel daily from “A” to “B” area. Which of them car you are going to automate obviously the second car which needs daily working the same things. So PLC’s also used in Automation to do same things billions or trillions of time a day which is impossible for a human being or if it’s possible so humans actually can’t  do same work again and again but the robots can they will not get tired. Another example for automation is picked and place robots that pick and placed things again and again. So automation is used for repetitive actions occurs and for automation PLC’s are highly recommended.

Ladder diagram programming there are many other software for PLC programming. we used “WPL soft”. PLC is similar to the microcontroller and it is also connected to the computer. The logic that you want to perform the task you have to make in a program called ladder diagram and transfer it to PLC and PLC execute the program and come across some logic and then those logic controls the output.
First of all, we will see what are the components of ladder diagram 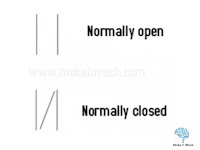 Normally open means it is in a normal condition like normal electrical buttons. For example, you have to ON fan and you turned the button ON then the electricity passed through it but at normal condition, before turning On the switch the fan is OFF.

In Normally Closed switch condition the electrical contact is made and the current flowing through it. But if you click to turn ON it. It will be going to turn off originally. At the output, there will be relay or Coil. Why we call it a ladder diagram the simple answer is its programming looks like a ladder so it is called as a ladder diagram.

This was the basic introduction to the Programmable Logic Controller (PLC) and Ladder logic.

Hope you like this tutorial there is a series of Tutorials and videos about PLC ladder logic diagram that will help you to learn a lot more about PLC’s so follow us for latest updates or get connected with us on Facebook and YouTube.