Now do all the necessary steps for creating the maker hub project.Place while loop and open and close boxes.

The easiest way is to place or modify things id to search.Go to Help > find Examples and now type in the search window Digital read n Channel.

A ready example will be open up if you have any issue placing basic parts like open and close and other peripherals.

Now Type in the search window > Bool to decimal > a bool array will be shown in the search bar pick that one and place into the project.now connect to the digital read n channel values output line and after Boolean array connects an indicator for displaying decimal value.
see the figure below to understand the concept.

Take 4 digital Arduino pins.connect the out put of the circuit to that pins.Give power to the circuit from Arduino board.

Open up both the windows of your project and connect Arduino to the serial port.Now select Com Port and Run the program. One more thing before running the program is to give the corresponding digital pin number to the digital array that is alongside the led array.

Now press the push buttons in a way that binary logic works that are 1-2-4-8. The corresponding number will be shown on the decimal indicator.
If you need the files then Comment below and Subscribe to our YouTube channel for video Tutorials. 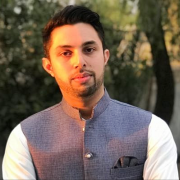